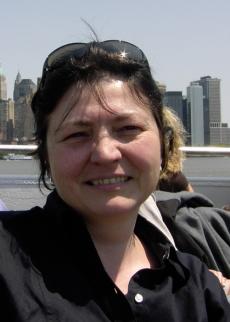 I started telling my children stories about…letls say twenty years ago. My eldest daughter refused to eat, and thus emerged The Noodlesl Fairy. Then she was afraid of frogs and goose Ghighi came along to protect her. One by one, emerged these characters… Hearsprettywell the rabbit -my little daughterls friend-, Piki the blue sheep, Bobo the parrot… and I turned bit by bit into Alina Sobolina. This happened while I was working at the radio and wrote stories for my friend Dana-Crystalvoicels Sunday morning show. The phones I received made me realize that many children were listening to me. Moreover, one day, two little girls left at my gate a big thermos flask filled with coffee and a box of homemade cookies. “So you have appetite to write”, they smeared on the lid with a violet pen. And then I wrote. And I continued writing for a long time, while drinking coffee and eating homemade cookies, until the time came for me to leave the radio.

Later on, my children grew up, and I moved on to another type of stories, longer and more complicated – frankly speaking, for a while I stopped writing for children. I met mostly with very, very serious grown-ups, who wanted to me to produce another kind of books and to write theatre plays and novels for actors, which they could use to play on the stage or read alone until they get a headache. Sometimes grown-ups like to show off as being important people and your headache makes you very important. So I traveled a lot, by train, by plane and even by boat. Like Nile-The Crocodile. I saw many big cities, as wild as rabbit Hearsprettywellls forest. But in the end, it is home that I returned.

And one night when I couldnlt s’eep: I woke up to the sound of a knocking on my door; it was Veve Salvador, with the Oskar Dragon. They were very mad. I let them in so they wonlt scream in the hall of my block of flats; there are many elderly people in our block and we need to respect their resting time. But what do you know! They were not alone. They were followed by the Cake-man, Idly, Nile-Crocodile, Mrs. Ghionoaie, Puiu with his talking spinning top, Zurinka the beautiful, Herbert the bear, Marțipan the Prince… my kitchen got filled with guests. And they were very noisy; they wanted to live. They wanted to talk, to be heard. They were asking for their rights. What would you have done if you were me?